Æons ago, I went into an 18 month depression. Not the down-in-the-dumps sort of depression, but a true body shutdown that almost killed me. As near as I can determine, it was a body chemistry issue, not an emotional one, though the malady most certainly created emotional problems.

The biochemical malady is much harder to diagnose and treat. Usually the first thing that counselors and psychiatrists tried to do then was try and treat the symptoms, which really made the malady worse. Fortunately, I never went into the drug therapies, though. I have a couple of siblings who also suffer from the disease and were treated with medications, and the results weren’t pretty

In my more normal state, the imbalance shows up as “Free Floating Anxiety”, where a chore that I put off because of sloth later becomes an insurmountable burden. Often, the task I begin avoiding is one that I have done many times before without any difficulty. I never know where it is going to land, hence the term free floating.

I just caught myself today in one of those oddball manifestations. I need to get my pick-up inspected. It was due in Feb, and it is still sitting in the carport with expired safety and registration stickers. However, I need to sort some tools in the bed, repair an armrest, and clean it up a little before I go.  The poor old truck hardly gets a thousand miles a year on it nowadays …

Exercise seems to be the best cure for the malady, and if I set the worrisome project aside and go to another pressing project, that often is all I need to get me moving in the right direction. Another helpful thing is to recognize that it is the disorder itself that puts me in an anxious mode.

Anyhoos .. on my third cup this morning. We skip breakfast on Tuesdays and have an early lunch. I have installed fencing on an open deck to contain the dogs, but still need to build a swinging gate on the steps and replace the top handrails.

I sure like the warm weather … it also helps me ‘get out’ of the morass. The concrete birdbath is up, the cheap plastic one I use in winter is stowed. Grass seed is planted under a shade tree, window boxes are cleaned up and ready for planting. 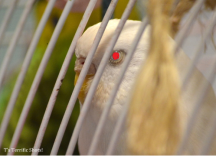 And Kippur da budgie is scolding me. I haven’t played any music for her today, and she wants to know why we can’t have a little noise in this damned mausoleum. Twice she has spoken her name, and now she torments us with silence as we try to get her to speak more. She has learned to mimic that little *dink!* that the computer gives when it is given an improper command, and to do the facebook *ding!* when a message comes in on it. Yeah. It would be something that evil little avian would pick up on.

So a good Tuesday to y’all …

Good Tuesday to you too. I can think of worse things for the bird to pick up on but that one would be annoying.

Just checking in on you friend, hope all is well

All is well … lots of spring chores, a few rescue runs, a cyclic writing slump and a general malaise have all conspired at once to keep me away from the keyboard …

I am sure MzMuze will soon visit …

Yep, and she’ll likely have the rod out for you too. Have a lovely Friday