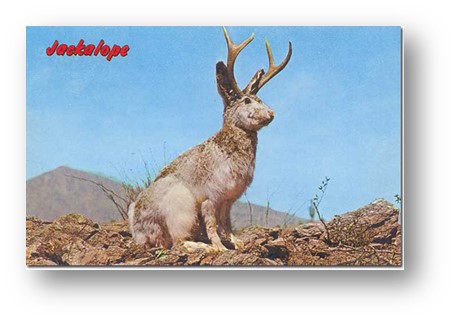 Bleary eyed I stumbled out of bed, retrieved the ever present cellphone from the bedside dock, tripped over joyful dogs who greeted me like I had just returned from Europe, filled my cup with Snookums perfect brew and padded down to my studio to see what has transpired since I shut the PC down last night.

A fast run thru the blogs yields an affirmation of a mates desire to not be a second string player in her life and gives her SO a firm reminder. However, a fellow blogger takes issue with the post and counter attacks.

Another tells of Eloping. Elope … I don’t know why, but I like the way the word rolls off the tongue. Maybe it was because the word is so close to jackalope, a mythical creature, half jack rabbit and half antelope that has reportedly been chronicled along old Route 66. I used to have a postcard with a picture of one that I purchased at a curio stand in Gallup, New Mexico that proves that they exist.

Another chronicles her love of renaissance fairs, and includes a snap of her with a garland in her hair. You can see why she loves them. Or maybe the pic shows that she loves them. Either way! Munch away at a turkey leg and let your mind get a small taste of what it would be like to be ‘Enery the Eight ..

And there are tales grand conspiracies complete with cites from one side, and pules on the other of how so many people vilify their candidate.

A picture of Salvia greggii (Autumn sage) reminds us to plant for the wildlife as well as for beauty.

And at home, a budgie next to my PC shrieks and chatters to me to put some sounds on. I should. Parakeets live in very noisy environments, and a too quiet house depresses them. The mutts circulate in and out to greet me and to check up on the one isolated member of their pack, and are reassured by a comment and a pat on the head that I am still a part of this family.

Snookums crashes out of the house with three dogs on a leash for a morning gad-about around Shirley Loop, named after the developer’s wife.

And an applique of a menorah (lampstand) rolled up on the hall table reminds me that it needs to be applied to a wall in the synagogue. Maybe that will be a good project for tomorrow. Snookums is bitc … er … complaining about the pile of brush along the route she drags the trash can out to the road every Wednesday. Maybe I need to cut it up into firewood and pull the remaining limbs to the burn pile before doing work away from home.

And Snooks computer is still on the dining room table where I am re-installing Windows on it, in preparation for setting it up for high end graphics. She was a PhotoShop® maven at a newspaper and high-end print shops, and local congregations are always needing brochures, CD covers and such, so her skills are coveted, and she finds joy in being useful. So got to get that done too.

But for now, there is you, a shrieking budgie next to my ear, a riding mower humming in the distance and a mug of coffee at hand. Life is good.