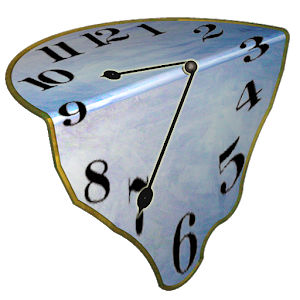 Mr. Bladder has now trained himself to wake me at sunrise, and Tic, the latest acquisition to the canine side of the family, conspires with him. However, it has been a long-time ambition of mine to free myself from that infernal tick tock machine.

So far, I have been moderately successful in getting back to sundial time, but there are many conflicts. Doctors, for one. I wasn’t aware of how linked in to the medical profession I was. They insist on appointment times set by the clock, not the sun.  And Snookums, the love of my life, is a total creature of habit, and governs her life quite nicely by the clock.

In fact, we have wall clocks in every room of the house that we regularly use that enforce her daily routine. Rouse at 7:00am. Morning ablutions at 7:15am. Pour coffee at 8:00am. Feed mutts at 8:20am …

I have a ‘Jewish Clock’ installed on my tablet that sits on my desk that keeps a form of God’s time. It was designed for prayer observances, but the designer mistakenly used the Roman system of twelve-hour days on it, with the 11th hour being the last hour of the day. The 12th hour being sunset.

The Jews had a sundial with eight hours on it, the last hour being the 7th hour of the day. The 8th hour was called sunset.

In the first century, Jews used both Roman and Jewish time, but it wasn’t a major problem because they referred to the Roman clock in Latin, and the Jewish clock in Hebrew.

Those two distinctions were lost when the modern scriptures were written in Greek, and that gives Bible expositors headaches to this very day.

However, for us old men who wake at dawn with full bladders, and nod off to sleep shortly after sunset, our sun clocks only have five hours. Wake, Breakfast, Lunch, Dinner, Sleep. We wake with the sun, sleep with the sun. And eat with the damned tick tock machine. And that what makes us grumpy …

Look at the bright side. If your bladder only wakes you at sunrise, you get several hours of uninterrupted sleep. Mine wakes me at least twice in the middle of the night, so I should be the grumpy one. And sometimes I am 🙂

LOL! Well, I unwisely decided that I wanted to rise with the sun … I probably should take more liquids before bed, but I just hate piddling in the middle of the night …
=

I read that one should drink a full glass of water right before bed and two full glasses upon awakening. According to heart doctors, this is supposed to keep your blood thinner and prevent clots. They did mention that you may have to get up in the night to use the bathroom, but that was better than having a heart attack. They didn’t mention the part about being groggy and running into the bathroom door… 🙂

I can’t be trusted in the middle of the night … I once got up and went into the bathroom, but couldn’t find the light switch, But then, there is no light switch in the walk-in closet … glad I didn’t just assume the commode was in front of me …

I bet Snookums is glad too!