I was just going thru the Picassa album and came across a picture of Mu, Sherry’s pit-bull that was a rescue from a street gang. She was a real sweetie among people, but a terror to other dogs. When Sherry came to live with us, it became apparent that I was going to steal her dog. 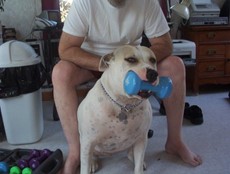 Mu fell in love with me at the first meeting, and felt that she had to defend me from all other canines, which caused a lot of uncomfortable moments in the house. I could not go anywhere without Mu. The women lost the prized center seat position, and my girl Mu would sit proudly beside me as I made my rounds.

She also was a fireplace dog, and her joy at the prospect of a fire was a real pain in the butt when I was building the fire. She was the only dog I knew that “snorkeled” when she was happy, and the only dog I had that seemed to smile.

I had a daybed that was right by my studio chair, and in the mornings and evenings when I was at the desktop she would lay by my side in happy bliss while I pounded out writing exercises in a vain attempt to master the art of writing.

But one night, four years after she came into my life, she was more clingy than usual. Sometimes things would disturb her, like a new heard in the pasture next door, or a skunk in the neighborhood, so clinginess was not unusual. But this night was different. When I went to bed, she came in and lay by my hand. I knew something was wrong, and I decided to take her into the vet that next morning.

But that morning, I found her by my studio chair, drawing in her last breaths. I think she waited for me before giving up that last breath. There was no time to get her to the vet, and we sat with her until the last death rattle.

Sherry sat down later to write of it, and realized that every story she had of her involved me. I had indeed stolen her dog.